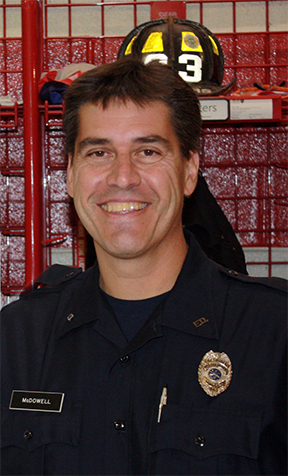 His Funeral Mass and interment will be held privately

Scott R. McDowell, age 51, passed away Friday, March 13, 2020 at Abington Jefferson Hospice in Warminster, PA. He was surrounded by his loving family after a long and courageous battle with pancreatic cancer. Born in Philadelphia, he was the son of Richard and Sandra Haskins McDowell and a lifelong resident of Churchville, PA.

Scott is the beloved husband of 21 years to Janice Lunova-McDowell and the awesome father of Ricky and Sami, Lucky Dog and Blaze.

He graduated from Penn State University, receiving his Bachelor’s Degree in Business. He also earned his MBA from Rider University. Scott was an Administrator in Reinsurance with NJM Insurance Group in Trenton, NJ. He spent over 29 years as a respected member of the NJM family. Scott was a life member of the Northampton Township Volunteer Fire Department, serving over 30 years. One of Scott’s proudest moments was when his son Ricky graduated from the fire academy and started making fire calls with him.

Scott adored his children and loved spending as much time as he could with them. He enjoyed reading books and taking walks with his “Peanut”. He was a Black Belt in Karate and would often practice with his son Ricky, a second degree Black Belt. Scott was a published military aviation photographer. He also enjoyed playing golf in the NJM Golf League, where he won many championships. Most importantly, Scott was a devoted husband, father, son and brother who always put family first. In addition to Scott’s beloved wife and parents, he is survived by his sister, Chanin (McDowell) Coyle; Joe, Joseph and Kathleen Coyle; his mother-in-law, Helen Lunova, Karen, Jeff and Cailean Cavanaugh; Kathy, Mark, Mark Jr. and Rachel Zayleskie.

In keeping with Scott’s character of putting the safety of others first, the family has elected to have a private viewing, Funeral Mass and interment.

A Celebration of Scott’s life will be held at an appropriate time in the future.

Scott will be truly missed by his family and by all who came to know and love him.

In lieu of flowers, contributions in in his memory may be made to the McDowell Children’s Fund, 851 Bustleton Pike, PO Box 283, Richboro, PA 18954.